Welcome to the rim

This game is designed to be able to grow and expand, add new, more advanced technologies to the already existing universe as time goes on. The basic Warfleet game contains all of the technology used up until the end of the War of Independence in 2249. Thus, the basic Warfleet game is considered to be in Techlevel 2249. Each piece of technology and all starships state the year they entered service, so players may decide which Techlevel they wish to set a game in.

At present, there is very little technology available before Techlevel 2249. This might change as time goes on, but for the most part the game will be moving forward in time, not back.

Jumpspace is one of those things that humans can observe, figure out how to make work, and take advantage of, but truly do not have an understanding of what is actually happening.

Jumpspace is another dimension, separate from what is now called “realspace” or n-space, where many of the understood laws of physics no longer apply. Jumpspace is made up swirling tides of energy that happen to react with a starship in ways similar to physical matter. When a ship enters jumpspace its n-space velocity carries over and the ship remains at this relative speed for as long as it remains in jumpspace. Normal engines and reaction thrusters have no effect in jumpspace, for this reason a ship is unable to turn, increase or decrease its velocity once it enters faster-than-light travel.

This inability to turn within jumpspace poses the first practical limitation to FTL travel. A vessel is only capable of travelling in a straight line. Several effects from realspace -particularly gravity- effect jumpspace travel. In jumpspace these realspace gravity fields are called 'mass shadows'. Jumpspace is very sensitive to mass shadows and the physical area they cover tends to be thousands of times greater than the gravity well in realspace. Smaller stellar objects like planets and asteroids have sufficiently small mass shadows to pose little risk to a ship in FTL travel. They can however “bump” a ship off course -essentially changing the direction it is moving within jumpspace.  These effects are inconsistent and hard to predict. As such ships generally avoid jump paths that will take them across a known planetary mass shadow.

The mass shadow produced by a larger stellar body like a star, pulsar or quasar, or hypermass is significantly stronger and is sufficiently powerful enough to cause damage to the starship. A “brush” with one of these mass shadows may only burn out the jumpdrive and force the ship into realspace, whereas a more direct collision is likely to result in the mass release of stored jump energy, and thus the complete destruction of the ship.

The effects of mass shadows are amplified by the relative speed of the ship. A ship moving very slowly through jumpspace will be fairly safe. If a vessel carries sufficiently slow velocity from realspace into jumpspace it can even jump within a mass shadow with little ill effect. For this reason it is not uncommon for ships to exit jumpspace near a star system, slow down, and re-enter jumpspace at a very low speed for the final leg of their journey.

The second limitation to jumpspace is the necessity to bleed jumpspace energy before making another jump. The FTL coils in a jump engine continually build up energy while the ship is travelling in jumpspace. A vessel can remain in jumpspace only until the coils can retain no more energy. For most civilian ships this is between 15 and 30 days. Longer range ships like scouts and deep space freighters have larger coils and can stay in FTL for 30-45 days. Few ships have large enough coils to remain in FTL for more than 60 days. The main drawback is that once a ship returns to n-space, it must now bleed off the jumpspace energy stored in the coils. Some jumpspace energy can be used to power ship systems while in jumpspace, but once a ship returns to n-space most of the coil energy must simply dissipate. The longer a ship spends in FTL the longer it must spend in realspace to bleed off the energy. This ratio is not linear. For short jumps it sits around 30:1 -an hour spent in jumpspace will bleed off in roughly two minutes. For longer trips this ratio becomes closer to 1:1. A ship that spends 60 days in jumpspace requires 60 days in realspace to bleed off jump energy. If any energy is retained in the FTL coils the vessel is simply not capable of making a jump to FTL. Any attempt to power up the FTL drive with energy in the coils will fail, often spectacularly. Modern FTL drives contain fail-safes to prevent the drive from being powered while it is still bleeding energy. Shield systems were originally designed to protect starships from the dangerous hazards of space travel, such as excessive heat, radiation, and meteorites. Their design also had the effect of protecting ships from weapon damage.

Generally, the shields found on ships have two settings. One is for normal running, uses a minimal amount of power, and will not protect a starship from powerful weapons. Almost every ship that travels the stars is equipped with shields of this level. Larger starships are capable of supplying energy to shields many times more powerful that are far more effective and reducing the damage caused by weapons.

Modern shield systems have three main components: one or more shield generators, numerous shield projectors, and an energy feedback grid. When shields absorb kinetic damage it is converted into energy and fed into the feedback grid. This grid then shunts the energy back into the shield system. The principle is that the energy shields “push back” with the exact same amount of potential energy that they absorb, thus stopping all damage taken. The unreliability of the system comes from the fact that, in order to stop damage, the feedback grid must shunt the energy back into the shields within microseconds. Sometimes it takes longer. When this happens the shields miss their margin for stopping the damage, and all damage is caused directly to the ship's hull. For this reason modern starships still mount armour. When damage is sustained to a starship the energy runs to and from the feedback grid can be damaged, thus reducing the overall effectiveness of the shield system.

Because shield systems were originally designed to protect a starship from kinetic impacts, modern laser weaponry is very effective at breaking through shield systems. 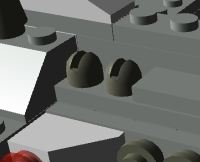 Turrets are the primary weapon systems on small- and medium-sized starships, and form the most common secondary weapons on larger ships. The standard turret battery consists of an armoured blister fitted with autocannons firing a high-explosive or armour-piercing round. While the individual rounds do not cause a lot of damage, a turret is capable of firing a lot of them quickly. Turrets can be quite effective when used in groups. For this reason most starships equip numerous turrets capable of firing through collective fire arcs to saturate an area with rounds.

Because of their high rate of fire turrets can double as point-defence weapons.

A Gauss cannon is a large-calibre smoothbore weapon that uses electromagnetic fields to accelerate a large ferromagnetic projectile to extremely high velocities. Their size, mass, and power requirements make them impractical on most escort ships. They serve as heavy weapons on cruisers to compliment their turret clusters or turret armament. The cannons in common use are found in three variations -Short, Standard, and Long (officially designated Type 2S, Type 2, and Type 2E). Longer barrelled cannons have a narrower bore and fire a lighter projectile. Combined with the increased barrel length this greatly increases the velocity of the projectile making the weapon more accurate against moving targets at long range. The shorter cannons have a larger bore and fire significantly heavier projectiles that result in more kinetic damage to their target, but have a lower muzzle velocity and are thus more difficult to use at longer ranges.

Cannons are mounted either on swivel gimbals that give them a wide sweeping fire arc or on fixed mounts.

Because Gauss cannons rely heavily on the kinetic impact of their projectiles to cause damage modern starship shields are very effective at stopping cannon shots. However when a projectile strikes the hull the damage is often devastating.

The invention that made the Moraton Corporation rich, laser clusters now make up the primary weapons on larger ships or at the very least compliment a ship's turret armament. A typical laser cluster fires several highly focused beams in rapid succession, allowing an attacker to saturate a target area with destructive firepower. Unlike cannons and turrets -which react readily with a ship's energy shield- lasers are so tightly focused that the effectiveness of energy shields is greatly reduced.

Laser clusters do have several drawbacks. One is the power requirements. Most smaller ships do not have sufficient energy to mount laser clusters (or mount only one or two). Another drawback is that the projection lenses have to have a solid mount. Unlike cannons which can be placed in a swivel mount, laser clusters have a large amount of support equipment which makes mounting them in traversing turrets impractical. The end result is that most laser clusters have narrow fire arcs compared to most other weapons.

The final drawback is the cost. The crystals used in laser clusters are rare, expensive, and difficult to refine. Outfitting a ship with laser clusters instead of more conventional weaponry can increase its cost by more than a third.

Despite the drawbacks, most newer warships mount laser clusters as their primary armament.

An older, but none the less effective weapon, salvo missile systems are launch systems that fire a large number of self-guided missiles at close to medium range. They are generally fairly powerful for their size, but often cannot be easily reloaded, meaning most salvo systems are of the single-launch variety.

Reblast cannons are small, cheap, crude but effective weapons. Because they rely on a capacitor they can fire as slow or fast as their host platform can charge, meaning they can be placed on small vessels.

Despite their advantages the blast is not focused into a coherent energy stream and loses effectiveness very quickly with range. Because of this most starships of frigate-size or greater mount longer ranged weaponry.